Am I at risk if my relatives have cancer? 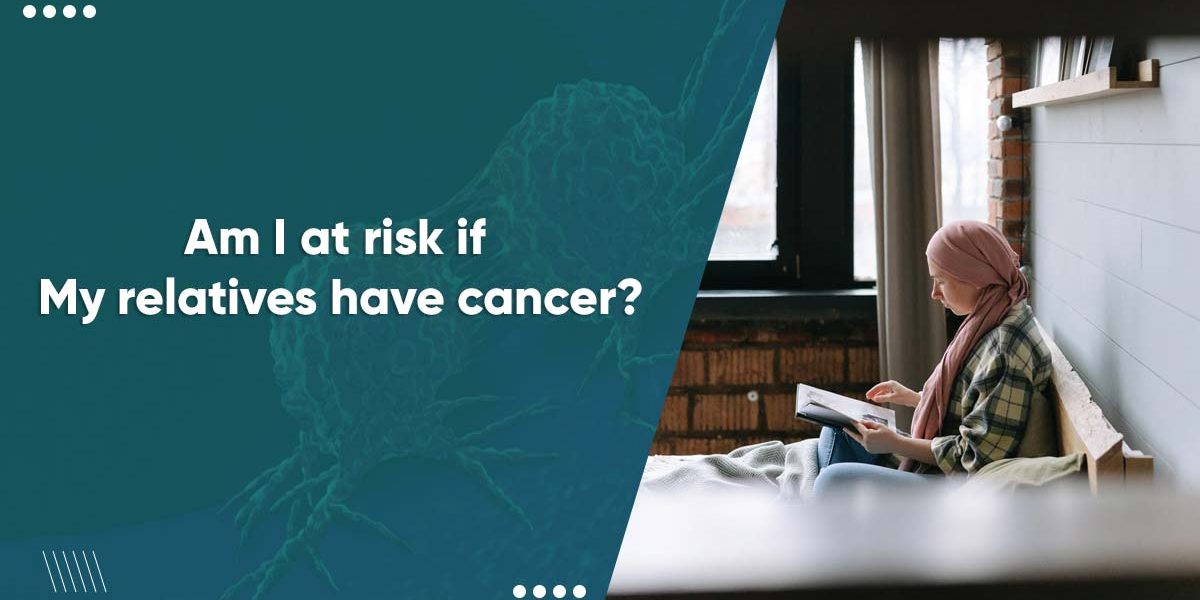 Raise your hand if you have a family member who has been diagnosed with cancer. You’re not alone if you’ve ever worried about what that means for your cancer risk. Cancer is a sickness that affects each one of us in some manner.

Everyone has had someone in their family with cancer at some point in time. As a result, many become frightened and wonder, What are the odds that other family members or I would have cancer as well? Cancer is caused by genetic alterations, although this does not always imply that it is inherited.

Some cancer-causing genes(usually referred to as inherited cancer genes) can be handed down from one generation to the next. This happens when a gene in an ovum or sperm cell malfunctions at the time of fertilization. These flaws(termed as germline mutations) in the first sperm or egg cell are replicated in every cell of the body and can be passed down through generations.

Both of the parent’s genes are passed down to the offspring. If a parent has a defective gene, each child has a 50 percent chance of inheriting it. As a result, some children will have the defective gene and an elevated risk of cancer, while others might not.

Being born with defective genes does not guarantee that a person will develop cancer. However, they are often more prone to it than other people. This is referred to as a cancer hereditary predisposition by doctors. Further gene changes (mutations) are required for cancer to develop.

What cancers can run in families as a result of genetics?

Regardless of the fact that cancer is so widespread but only 5-10% of these instances are caused by genetics, which means that a person has inherited a higher risk of acquiring cancer from their parents. A tiny alteration called mutation in a gene causes this inherited cancer risk, which can be passed from generation to generation in a family. When a child inherits this sort of gene mutation from their parents, they are more likely to develop a particular form (or type) of cancer. The following cancers are hereditary:

So, what is the role of genes in causing cancer?

The nucleus is a structure found inside practically every cell in your body’s control center. There are 23 pairs of chromosomes (genes) inside the nucleus. Genes are pre-programmed instructions that guide cells on how to behave. They are in charge of how our bodies develop and evolve. Each of us has roughly 25,000 genes.

All cancers are thought to be associated with one or more genetic disorders. These flaws can cause a cell to stop functioning correctly. It could then turn malignant, dividing and proliferating. The majority of gene modifications occur during our lives, although some are inherited from our parents.

The significant reasons for cancers are caused by genetic flaws that evolve. They usually occur as we become older as a result of random errors made during cell division. They could also happen due to something we’ve been exposed to, such as cigarette smoke. These substances are regarded as carcinogenic by doctors.

There is frequently a trend of specific types of cancer running in families with an inherited defective gene. The following factors influence the strength of your family history:

The greater the number of relatives who have had the same or similar types of cancer, the stronger the person’s cancer-related family history. This suggests that cancers are more likely to be caused by an inherited defective gene.

If any of the following scenarios apply to you, you may have a strong family history:

It’s crucial to keep in mind that cancer is most common among older adults. Each year, those aged 75 and up account for more than a third (36%) of all cancer cases.

Read: Is Cancer Curable or Remissible?

Defective genes and other factors

Some cancer genes are more likely to produce cancer than others when passed down through the generations. Many other conditions must be present for cancer to form, in addition to a gene flaw. As a result, cancer might skip a generation.

Researchers need to research intensively to know more about the various elements that influence the different types of cancer. However, they’re also trying to figure out the role of gene interaction in causing cancer so that an individual can lower the chances of getting it.

Some cancers run in families. This doesn’t guarantee that you’ll get cancer if some of your close relatives do. However, it does imply that you’re at a higher risk of having specific malignancies than other individuals with healthy genes. An inherited defective gene is thought to be responsible for 3 to 10 out of every 100 malignancies.

Inherited cancers are far less common than cancers caused by other factors such as aging, smoking, being overweight and not exercising consistently, or not eating a good, balanced diet. Most cancers are caused by a mix of risk factors, including family history in some circumstances.

If you or a member of your family has developed one of the cancers listed above and you are concerned that you might develop cancer as well, you should see your doctor. They’ll inquire about your family history and recommend you to a genetic counselor, a family cancer clinic, or a cancer specialist if they believe you have a higher risk of developing cancer. Visit University Cancer Centers to know more about the role of genetic mutations and heredity in cancer.