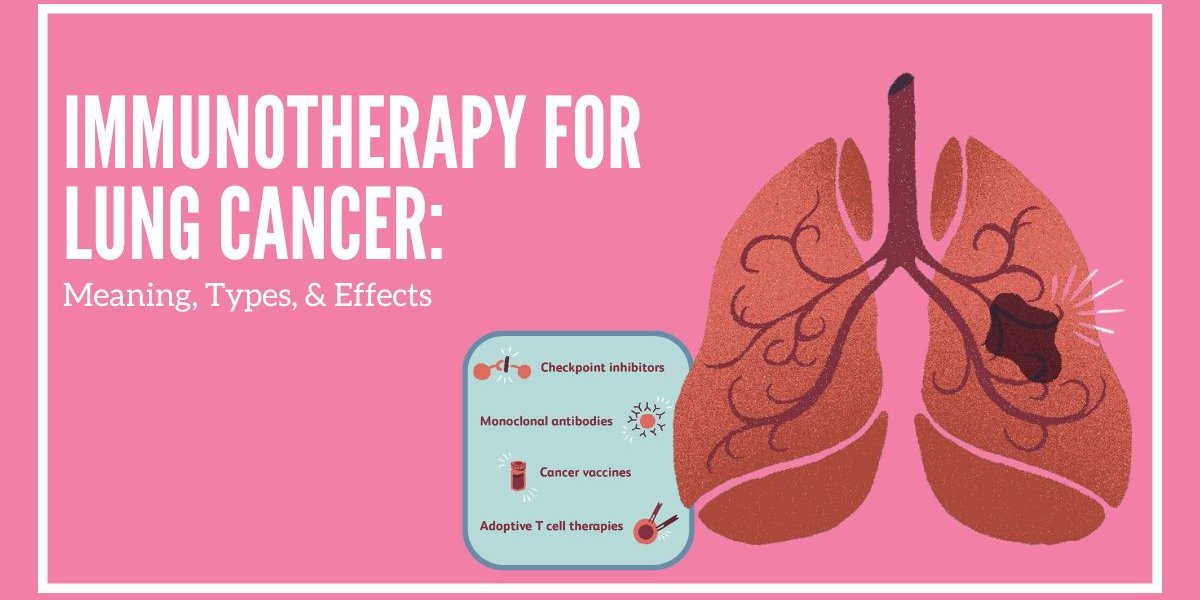 Our body’s immune system protects us from unwanted invaders like bacteria, viruses, or tumor cells. But, they may not defend our body from cancer cells. In this case, Immunotherapy for lung cancer stops cancer cells from hurting the immune system and boosts the fight against it.

Lung cancer affects approx 2.1 million people worldwide, with an estimated 1.7 million deaths. Immunotherapy is a new treatment option to benefit people with some kinds of lung cancer. It allows the body’s immune system to detect and attack cancer cells. Let’s know everything about this effective cancer treatment.

We all know that the immune system protects our body from foreign agents. It attacks bacteria and viruses, keeping our bodies safe. However, cancer cell includes normal human organ cells, and they both have familiar features to some extent. Due to this, the cancer cells become successful in avoiding the immune system.

What Are the Various Types of Immunotherapy For Lung Cancer?

Immunotherapy can be helpful for people who have lung cancer. Below are its various types for treating lung cancer patients.

There are many approved drugs for lung cancer treatment that target immune system checkpoints. These drugs have similar side effects as chemotherapy, such as skin rash, fatigue, itching, nausea, etc.

However, these drugs’ side effects are less than chemotherapy’s. In this case, Immunotherapy helps the immune system to detect and stimulate them to attack cancer cells.

You must have heard of vaccines that help keep away various diseases. Several helpful vaccines are available worldwide, including the therapeutic vaccine. It is a helpful vaccine that improves the immune system and allows it to destroy any current cancer. This type of vaccine targets proteins available in the cancer cells. These proteins are not present in other normal cells or may only be found in very few of them.

Before giving a vaccine to a person, vital medicine is given to dampen the immune cells that help cancer grow. These vaccines are customizable according to one’s cancer to the target protein. But these cancer vaccines have not received approval for lung cancer treatment by the FDA; they are still in clinical trials.

This therapy removes T-cells from the body and alters them in a lab. These cells are a type of immune system white blood cells. Thus, the immune system attacks specific cancer cells better.

After modification of the T-cells, these are put back in our bodies to fight cancer. Removing the T-cells from the body is done using a method, Plasmapheresis. It allows for blood filtering and identifying certain kinds of blood cells.

The other process of doing it is by getting part of the tumor removed and T-cells separated from the body. Researchers are still studying this type of therapy, and the FDA does not approve it to cure lung cancer.

Who Are Suitable For Immunotherapy Treatment?

Previously, chemotherapy, surgery, and radiation were some treatment options for lung cancer patients. But, when these options proved weak, researchers found a new treatment called Immunotherapy.

It includes many FDA-approved drugs for lung cancer that are advisable to the patient at the advanced stage. But, most people at their initial stage receive this treatment.

Sometimes, chemotherapy or two distinct kinds of Immunotherapy are given to the patient. Each drug has its specification that must be given according to the lung cancer type, past treatment history, and current general health.

How Immunotherapy Differs From Other Lung Cancer Treatments?

Chemotherapy treatment uses chemicals to destroy cancer cells. It can affect your body’s healthy normal cells and shows many side effects, including fatigue, nausea, hair loss, reduction in the count of white blood cells, and many more.

Unlike other therapies, radiation therapy involves the usage of solid X-rays to destroy cancer cells. This therapy focuses on attacking specific targets in tumor cells that help grow it without any control. Targeted therapy deals with mutations in some kinds of lung cancer tumors.

However, Immunotherapy focuses on targeting the communication between the body’s immune system and the tumor. It helps the immune system fight against cancer and destroys its cells.

This therapy is different from other lung cancer treatment options. As it is a new treatment, care is essential while taking this therapy. A patient can take various types of Immunotherapy according to their cancer problem, symptoms, and health issues.

To know if you can get Immunotherapy or consult with the experts at University Cancer Centers. Our expert doctors are experts in the areas of lung cancer, breast cancer, skin cancer, and various other types of cancers. We have helped many patients recover from cancer and go back to their normal lives through our customized treatment approach. To know more about lung cancer and its possible treatments, book an appointment with our experts. To book an appointment, call us at (713)-474-1414.

Why choose Immunotherapy as a lung cancer treatment option?

What is the process of doing Immunotherapy?

This treatment involves injecting the drug into a vein using an injection. Some Immunotherapies are given directly into the one’s body cavity where the cancer is present.

What various cancers can be treated by Immunotherapy?

What are the side effects of Immunotherapy?

Does Immunotherapy work for all lung cancer patients?

Immunotherapy is a great option for treating lung cancer. But, not all patients find it effective. You cannot predict whether it will respond to your body or not. You must talk with your doctor before taking any kind of therapy option for lung cancer.