Lumpectomy vs. Mastectomy: Which is Better for Breast Cancer? 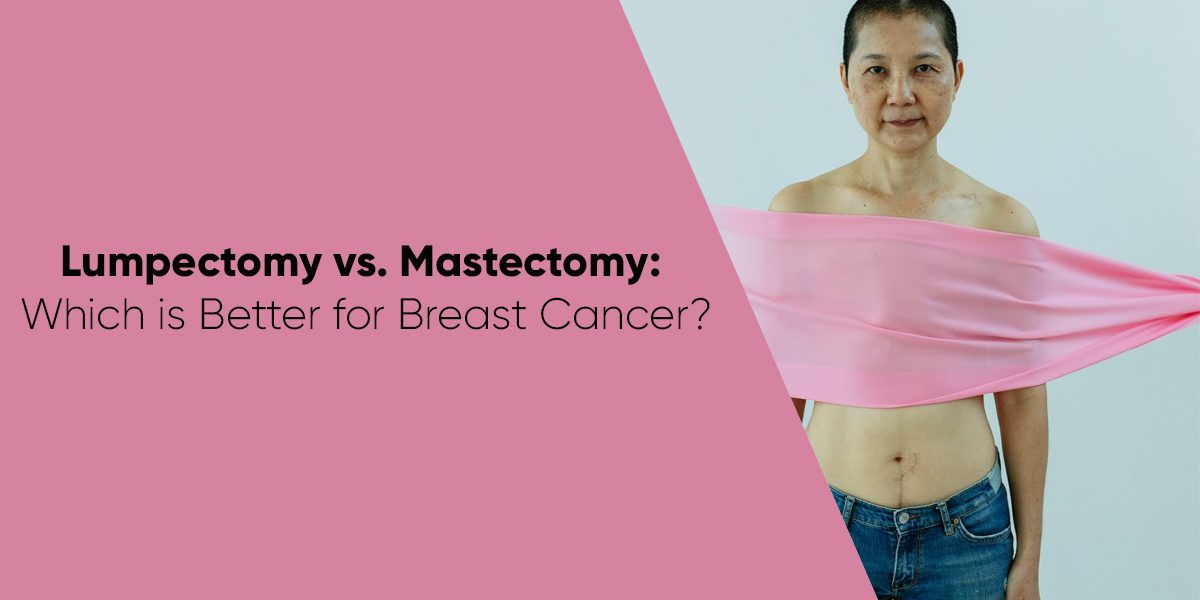 People with breast cancer can choose between total removal of a breast (mastectomy) or breast-conserving surgery (lumpectomy) followed by radiation in specific conditions.

For people with only one side of cancer in the breast and a tumor less than four centimeters, a lumpectomy followed by radiotherapy is likely to be as beneficial as mastectomy. It is also necessary to have clear margins (no cancer cells in the tissue surrounding the tumor).

Lumpectomy vs Mastectomy: Which is better?

Your doctor will extract the tumor and any damaged tissue from the surrounding area during this procedure. The following names also know this method:

Your doctor will examine you after the procedure to ensure that all cancer has been removed. If that’s the case, the lumpectomy was a success. If this is not the case, your doctor may have to remove more tissue. A lumpectomy will be out of the picture in more challenging situations.

After a lumpectomy, you’ll almost definitely need radiation therapy (RT) to prevent recurrence and remove any residual cancer cells. Patients with a limited invasive form of cancer should consider this surgery. Doctors may prescribe a mastectomy if cancer has spread across the breast or if the tumor is too large.

Unlike lumpectomy, mastectomy is a surgical procedure that removes a breast and occasionally surrounding tissues to treat breast cancer. For many years, the standard treatment for breast cancer was a radical mastectomy, which involved removing the entire breast, lymph nodes in the underarm, and also some of the chest muscles behind the breast. Surgical advancements, on the other hand, have offered people more alternatives than ever before. Many women can benefit from non-invasive breast-conservation procedures.

Several factors, including determining the type of mastectomy that is best for you.

Pros and Cons of lumpectomy

In comparison to a mastectomy, a lumpectomy is less invasive. The operation concentrates on the damaged tissue, which helps to keep your breast in its original shape. A lumpectomy is frequently a same-day operation that permits you to return home after surgery.

There are a few drawbacks of lumpectomy:

After lumpectomy surgery, you’ll probably have 5 to 7 weeks of radiation therapy, five days a week, to make sure the malignancy is gone.

After a lumpectomy, there is a slightly higher chance of a local recurrence of the malignancy than after a mastectomy. Mastectomy, on the other hand, can be used to treat local recurrence.

If a recurrence in the same breast occurs following a lumpectomy, the breast cannot safely take further radiation. This is true for a repetition of previous cancer or new cancer. Your doctor will almost always prescribe a mastectomy if you have a second malignancy in the same breast.

Following your lumpectomy, you may need one or more further procedures. During a lumpectomy, the surgeon removes the malignant tumor and some of the surrounding normal tissue (called the margins). A pathologist examines the margins for cancer cells. If cancer cells are present, more tissue must be removed until the margins are cancer-free. This should all be done during the lumpectomy. However, the margin analysis can take up to a week. As a result, sometimes, after the pathology report is completed, the margins are discovered to contain cancer cells, necessitating additional surgery (known as a re-excision).

Pros and Cons of Mastectomy

The mastectomy is the procedure that gives the most mental peace. Removing the entire tissue increases the likelihood of preventing recurrent breast cancer and reduces the need for future procedures.

Furthermore, most women who get a mastectomy do not require radiation therapy, which can be time-consuming and painful.

Mastectomy has a few drawbacks:

Factors to consider when evaluating both procedures

Determining if you need breast reconstruction, and if so, which alternatives you qualify for, is frequently a multi-step process, including some back and forth between you, your breast surgeon, and the rest of your cancer care team.

The surgeon discusses whether a lumpectomy combined with radiation therapy would provide the same prognosis as a mastectomy.

You must have reasonable expectations for the cosmetic outcomes of breast cancer therapy. Poor results can have a long-term impact on your emotional well-being and self-image, even after your cancer treatment has ended. Fortunately, whether you choose a lumpectomy or a mastectomy, excellent cosmetic outcomes are more likely. Thanks to advances in plastic surgery and oncoplastic surgery techniques.

Regardless of our recommendation, some women eligible for a lumpectomy will still choose mastectomy or bilateral mastectomy (removing both breasts) because they have a genetic mutation that predisposes them to second cancer in either the same or another breast. By eliminating one or both breasts, they may reduce their chance of developing second breast cancer.

Making your own decision

You could take tremendous measures to protect your breasts because they are such a vital aspect of your identity — your feeling of who you are, regardless of your age or size. That’s an excellent approach to pursue, as long as it doesn’t jeopardize your general health and recovery prospects.