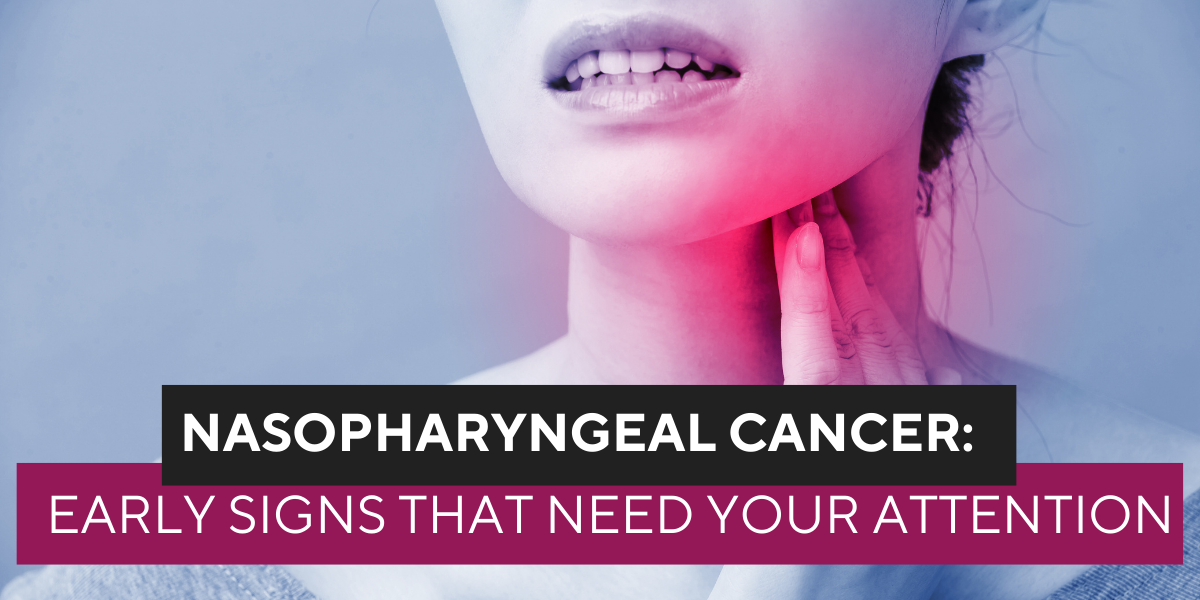 Nasopharyngeal cancer occurs in the nasopharynx, a portion of the throat behind the nose. It is the passage from which the water and liquid pass in the stomach. This type of cancer is mostly seen in men as compared to women. Knowing the early signs of this type of cancer in people is essential. Keep reading this post to know the causes, early signs, and treatment of nasopharyngeal cancer.

What Is Nasopharyngeal Cancer?

Nasopharyngeal cancer is rare cancer affecting the person’s head and neck. It targets the nasopharynx, which is the part of your throat. The nasopharynx connects the back of the nose and mouth of a human being. The reason for developing this cancer is the fast growth in cancer-causing cells.

This type of cancer is rarely seen in the United States compared to other parts of the world. According to the study, only 1 out of 100,000 people are diagnosed with this type of cancer yearly. Although there is no particular age at which it develops. It can even affect children and younger people less than 55 years of age.

In the early stages, nasopharyngeal cancer symptoms don’t show up. The early signs that are common among the infected people are as follows:

Lump In The Neck

You may notice a lump in your neck or nose. There may be multiple lumps in some cases, which causes no pain. The size of these lumps remains small in the early stage of cancer. While the mass and size of the neck lump increase with the spread of cancer to the lymph nodes.

You may face the problem of hearing during the early stage of cancer. With the development of this type of cancer, the problem turns out to be full hearing loss. The other problem people face is the continuous ringing in the ear.

Nose Bleeding is a common symptom people face during cancer in the nasopharynx. The nose bleeding can occasionally be in the beginning, which increases with time. Although, this symptom can be seen in the later stages of cancer.

Difficulty In Breathing And Speaking

When nasopharyngeal cancer develops fully in the nasopharynx tissue cells, it creates a problem with speaking and breathing. People face difficulty in breathing, requiring them to use an asthma pump regularly. This type of cancer also affects the vocal tissues, which causes difficulty in speaking.

What Were Your First Symptoms Of Nasopharyngeal Cancer?

When you consult the doctor for the first time, he may ask: What were your first symptoms of nasopharyngeal cancer? It would be best if you noticed the early symptoms in your body, which can cause aggressive cancer in the future. Here are the first symptoms of NPC people notice:

The main nasopharyngeal cancer causes are still unknown. After deep research, scientists found that the cause of this cancer is linked to infections, inherited characteristics, and diets. Here are the main causes of cancer in the nasopharynx according to the experts:

What Is The Nasopharyngeal Cancer Survival Rate?

The average survival rate of nasopharyngeal cancer (NPC) is 5 years. It means people who are diagnosed with NPC live at least 5 years. In the United States, around 61% of people survive, depending on other factors. The factors like location and stage of cancer also decide the survival rates.

Nasopharyngeal cancer treatment depends on various factors. One of the important factors is the stage of cancer. Different therapies and treatments are designed to treat cancer in the nasopharynx. Once you diagnose this cancer, you will need a regular checkup before and after the treatment. The expert will decide the treatment based on the tumor’s location, stage, and size.

In palliative therapy, there is the process through which the symptoms of cancer are controlled. During this nasopharyngeal treatment, a team of experts supports patients. It is a special treatment that motivates and makes people emotionally strong. Moreover, various checkups and medications help to control the spread of cancer.

Radiotherapy is the commonly used nasopharyngeal cancer treatment. This therapy is used to treat the early stage of cancer. During this, a large machine focuses the high-energy beam of radiation on the infected area. The different strengths of radiations from different angles. It is an effective way to treat NPC during the early stages.

The goal of giving biological drugs to patients is to improve their immune systems. These include various biological cure drugs like cetuximab, opdivo, and pembrolizumab. These drugs work differently from chemotherapy drugs and can be used in the upper stage of cancer.

Nasopharyngeal cancer shows little or no symptoms in the beginning. It is a rare kind of cancer affecting the nasopharynx cells and tissues. Although, various common symptoms like a lump in the neck or nose, hearing impairment, and difficulty in speaking make it noticeable. Once you notice these early signs of NPC in yourself, reach out to the cancer specialist on an urgent basis. They will diagnose and provide the right treatment to you.

We have a professional team of cancer specialists who treat the different stages of NPC with care. Our excellent therapies work on the root cause of cancer. Patients also receive time-to-time personalized checkups to ensure efficiency in treatment.

We provide the diagnosis and treatment of various types of cancer worldwide. Give yourself cancer-free life with University Cancer Centers.

Parathyroid Symptoms: Know Some Easy Ways To Detect And Treat Them
07/08/2022