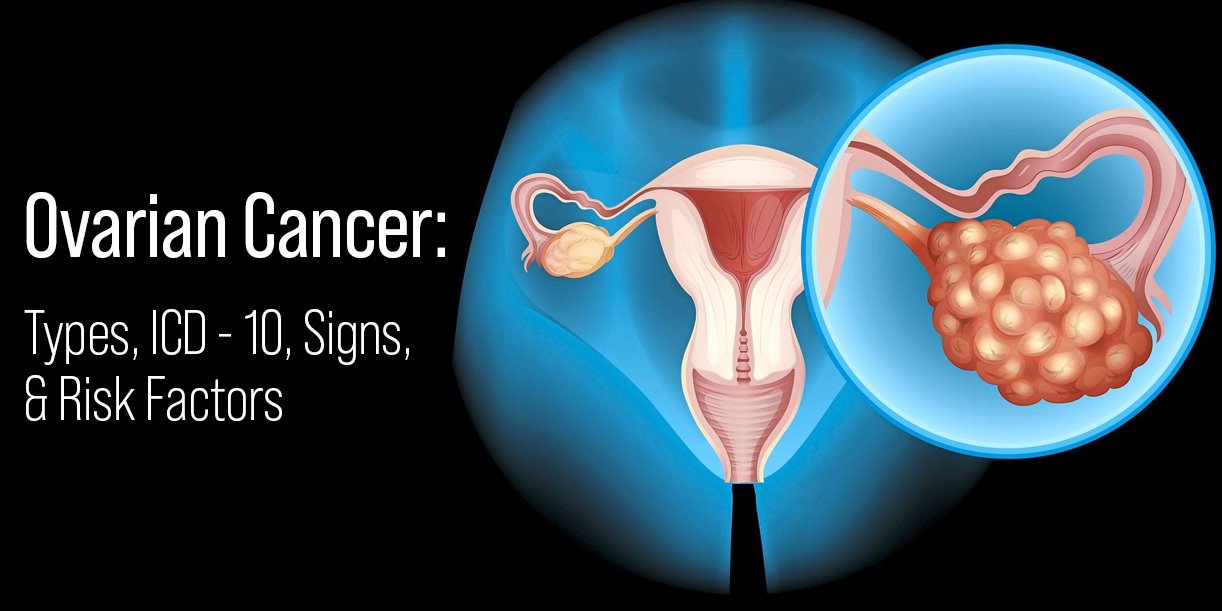 Identification and symptoms are necessary for classification through ovarian cancer ICD 10. Let’s know about symptoms, risk factors, and treatment. Ovarian cancer is among the fifth leading causes of cancer-related deaths of females in the United States. With that being said, the research done by the American Cancer Society suggests that the ovarian cancer survival rate has been higher in the United States over the past two decades due to more info and knowledge about the subject.

Let’s get into detail about the ovarian cancer symptoms, how to know them, and what steps to follow when they’re there.

What Is Ovarian Cancer?

Cancer forms when cancer cells in the body start growing out of control. Cells in any body part may turn cancerous and may spread.

The ovaries consist of 3 main cell types. Each cell may turn into another tumor type:

Many such tumors are (non-cancerous) benign and don’t move beyond ovaries. Rather malignant (cancerous) and borderline (low malignant potential) ovarian tumors spread (metastasize) to other body parts and can turn fatal.

How To Diagnose Ovarian Cancer?

It is simple to treat ovarian cancer when the doctor finds it in its early stages. However, it is not so easy to find out in the early stages. The ovaries are deep inside the abdominal cavity, so you’re not likely to feel any tumor, unlike other types of cancers. It is important to report any constant or new symptoms to the doctor.

When the doctor is concerned about ovarian cancer, they’ll most likely suggest a pelvic examination. Performing a pelvic exam helps the doctor find any irregularities, but it’s not easy to feel little ovarian tumors.

As the tumor grows, it presses against the rectum and the bladder. The doctor would or would not be able to find any irregularities in a rectovaginal pelvic examination. The doctor might also suggest a few tests like:

The imaging test TUVS uses sound waves for tumor findings in reproductive organs like the ovaries. However, TVUS can’t help the doctor know whether these are cancerous tumors.

People who are allergic to the dye can order pelvic MRI scans.

This is done to test lung metastasis.

A small ovary tissue sample is collected and studied under a microscope in a biopsy.

The test has a special dye with radioactive tracers injected or swallowed. Then tissues and organs absorb the tracer, allowing a doctor to note the working of those organs.

While with the help of such tests, a doctor can move towards a diagnosis, the biopsy is the gold standard to confirm the presence of ovarian cancer.

The ovarian cancer ICD 10 code is C 56.9, a billable code used to indicate a diagnosis for reimbursement. The C56.9 2022 ICD-10-CM came to effect on 1st Oct 2021. The ICD-10-CM American version and other international ICD-10 versions can be different.

The codes mentioned below above the C56.9 have annotation back-references that apply to C56.9:

While bilateral ovarian cancer is prevalent, ICD 10 terminology was previously not there in the bilateral ovarian cancer code. The SGO Coding and Reimbursement Subcommittee appealed it. Annually, the Centers for Medicaid Services (CMS) takes papers that outline newly revised and deleted ICD 10 codes to be effective as the new fiscal year begins in October. The FY22 updates are effective from Oct. 1, 2021, including 159 more, 25 less, 27 revisions, and various updates for guideline coding.

Two new diagnosis codes are there for the bilateral ovaries for primary and secondary malignancy. The coding committee in SGO requested such additions in 2019!

These codes are for assigning the primary location, not the metastatic illness site.

How To Treat Ovarian Cancer?

Ovarian cancer treatment is based on the spread of the cancer cells in the body. Doctors determine treatment plans for the situation. It most likely includes two or more of the following:

It is among the main treatment choices for ovarian cancers. The surgery aims at taking out the tumor, but uterus removal can often be needed.

Doctors can also suggest removing fallopian tubes and ovaries, nearby lymph nodes, and other pelvic tissues. It is difficult to find out all tumor locations.

Cancer treatments like radiation, chemotherapy, and surgery can result in reproductive organ damage, making pregnancy difficult. When you want to become pregnant, talk to the doctor before starting treatment. They also discuss options to preserve fertility possibly.

The options for preserving the fertility possibility are:

Surgery for preserving fertility: Surgery can only remove a single ovary in some cases. It is mostly possible in the early stages of ovarian cancer.

Reducing the risk factor can be done in many ways:

Most ovarian cancers begin in the outer lining or the epithelium of the ovary. You can have a few or no ovarian cancer symptoms in the early stages.

When symptoms are there, they resemble other conditions, like premenstrual syndrome, irritable bowel syndrome, or a temporary bladder issue. However, the signs of ovarian cancer persist and become worse.

Early Symptoms Can Include

Early symptoms of ovarian cancer may include:

When any of such symptoms are there for two weeks, the person should consult a doctor. Additionally, there can be symptoms like:

The symptoms change when cancer spreads to other body areas.

Ovarian cancer can develop when cells in this body area multiply and divide uncontrollably.
However, why ovarian cancer occurs is not clear, but experts have identified many risk factors. These are:

Reproductive history of one or more full-term pregnancies is linked with lower ovarian cancer risk. With more pregnancies, the risk becomes lower. Breastfeeding can also minimize the risk factor.
However, later having children or never having kids can increase the risk. People having some fertility treatment types have more chances of getting borderline cells, but many studies haven’t confirmed it. Women who use birth control pills or injectable contraceptive hormones are also at lower risk.

Women with breast cancer history may have more chances of having ovarian cancer. It is because of changes in the BRCA gene.
Due to this reason, some people with breast cancer test positive for such gene mutation and might go for surgery or oophorectomy to remove ovaries as a preventive therapy.

If you’re having signs of ovarian cancer and suspect it in the first place, it’s best to consult your doctor about the same. However, the best advice would be to consult cancer specialists at University Cancer Centers, who aim to utilize the best technologies to offer intensive treatment and care to cancer patients. Our world-class infrastructure and the most modern cancer research technologies are patient-centric and have positive outputs

Which Cancer Treatment Is The Most Effective For Patients: Learn It All Here
01/20/2022