The Complete Guide On Radiation Therapy For Lung Cancer 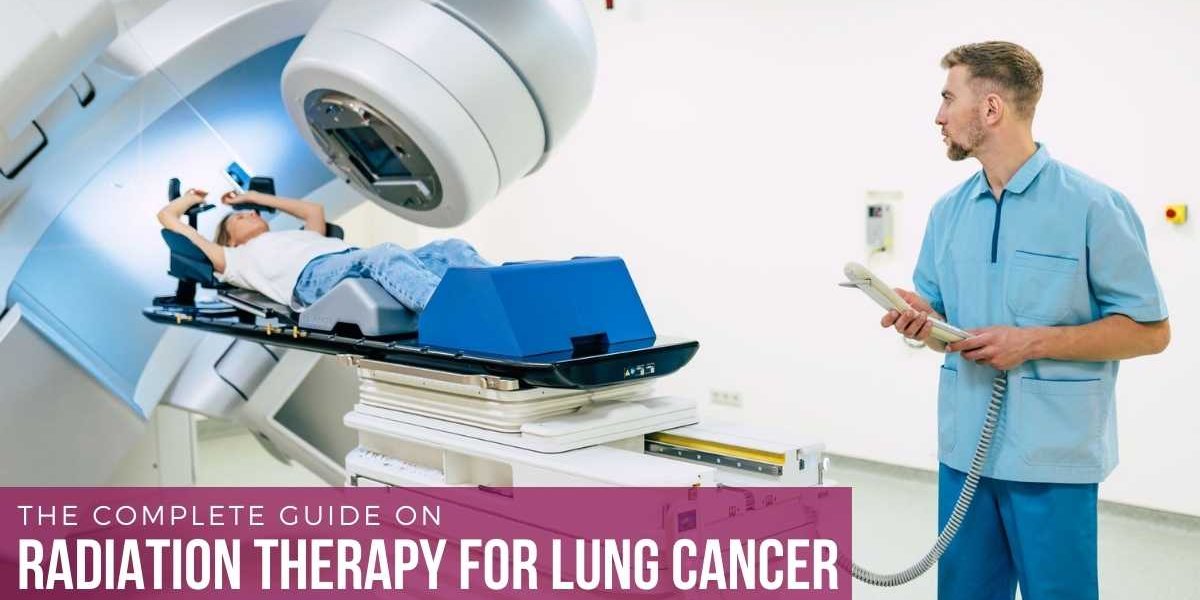 Surgery and chemotherapy have long been the ideal treatment for lung cancer, but it is not the right treatment for everyone. Today a highly targeted treatment, radiation therapy, is Stereotactic Body Radiation Therapy (SBRT), which is coming up as the most successful alternative treatment for patients with lung cancer.

Radiation therapy for lung cancer uses powerful, high-energy x-rays or other particles to destroy cancer cells. Radiation may be given from outside the body or from radioactive substances placed directly inside the lung cancer tumor, which is known as an internal implant, which we discuss later in this blog. However, radiation therapy that uses external ways is the most commonly used. External radiation targets the lung cancer tumor and destroys the cancerous cells, specifically in that area of the lungs.

When healthy cells change and start growing out of control, it is called cancer or early-stage cancer. All cells follow a cycle to grow, they divide and multiply, but the cancer cells go through this process much faster than normal. Radia therapy is mainly used to damage and kill the DNA, so the cells stop growing.

There are several types of radiation therapy, and they all target and destroy cancer cells differently.

Stereotactic Body Radiation Therapy involves sophisticated image guidance that pinpoints the exact three-dimensional location of a tumor. It delivers exceptionally precise and intense doses of radiation to cancer cells. SBRT helps to use high doses of radiation in a small number of doses. This approach is termed hypofractionated radiation therapy, which delivers high doses with extreme precision. Stereotactic Body Radiation Therapy is commonly used for treating early-stage diseases where the tumor is tiny and the cancer is limited to the lungs.

University Cancer Centers has a team of expert oncologists with extensive experience in using this technique, destroying tumors 90% of the time with limited side effects.

Intensity-Modulated Radiation Therapy is an advanced radiation therapy used to treat cancer and noncancerous tumors. IMRT utilizes several small photon or proton beams of different intensities to precisely and accurately destroy a tumor. The radiation intensity of each beam is finely controlled, and the beam shape changes throughout each treatment. Intensity-Modulated Radiation Therapy aims to follow the radiation dose, reduce exposure to healthy tissue, and limit the side effects of treatment.

The oncologists use proton therapy to treat some cases of lung cancer. This advanced therapy allows the doctor to deliver the necessary dose to the tumor, maximizing the chance of destroying it.

People with lung cancer are also a candidate for Brachytherapy. Brachytherapy utilizes radioactive material sealed inside a thin tube in the body during surgery to help lessen the risk of cancer returning after treatment. This also helps to deliver high doses of radiation to the airways utilizing a specialized approach called endobronchial Brachytherapy.

Brachytherapy is generally used to treat patients whose cancer has returned in the larger airways.

There are two different types of Brachytherapy (Internal Radiation Therapy):

Permanent implants utilize a capsule about the size of a grain of rice containing radioactive material. It delivers most of the radiation therapy around the implant area. Sometimes, some radiation may exit the patient’s body and require safety measures to protect others from radiation exposure. With time the implants lose radioactivity, but the seeds remain in the body.

This therapy is performed using a needle inserted via a tube called a catheter or through special applicators. The radiation usually stays in the body from a few minutes to a few days. However, most people receive internal radiation therapy for just a few minutes.

Sometimes the patient is given radiation therapy for more time, so they are kept in a private room to limit other people’s exposure to radiation.

The Goals Of Radiation Therapy

Primary Treatment: Radiation therapy is used as the primary treatment to get rid of all the cancerous cells and stop them from coming back.

Before Other Treatments: Radiation therapy is also given before other cancer treatments. It is usually given before surgery to shrink a large tumor. This is termed “neoadjuvant therapy.”

Side Effects Of Radiation Therapy For Lung Cancer

While radiation therapy is used to kill or slow the growth of cancer cells, it can damage nearby healthy cells, and damage to healthy cells can lead to side effects and other adverse conditions.

People who have gone through radiation therapy for lung cancer have complained about experiencing fatigue, nausea, hair loss, shortness of breath, and more.

Ensure to discuss the concerns, possible side effects, or any effects you experience with your doctor.

The esophagus, in the middle of the chest, is usually exposed to radiation during treatment, causing sore throat and trouble swallowing. This may trouble you eating anything hard, except some soft foods and liquids. However, this condition also stays for a while and usually goes away after the treatment.

A multidisciplinary team determines who is the right patient for radiation therapy. SBRT (Stereotactic Body Radiation Therapy) is an exceptionally good treatment for patients with early-stage lung cancer. Patients with a high risk of surgical complications can also be candidates for SBRT, such as elderly patients and patients with cardiac or pulmonary disease.

Radiation therapy is also used before and after the surgery or chemotherapy to shrink the tumor and block the chances of the tumor returning after the treatment. Unlike other cancer treatments, radiation therapy for lung cancer specifically targets the cancerous cells and destroys them without affecting the other parts of the body.