Skin Cancer : Who is at risk?

You are here:
Awareness + PreventionHealth Tips 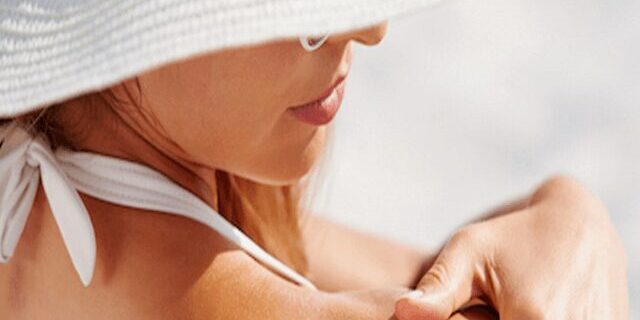 We know we’ve been talking about it a lot, and that’s because its serious business – skin cancer isn’t something to play around with. Sure, you yearn for sun-kissed skin now, but when you’re fighting a skin cancer diagnosis it isn’t all fun and games. Over 90% of non-melanoma skin cancers are associated with overexposure to ultraviolet (UV) radiation from the sun.

How Does It Happen?

Specifically basal cell and squamous cell carcinoma cancers are formed when a person receives too much ultraviolet radiation. There are two forms of UV radiation: UVA and UVB. It’s important to know what each one does and how it affects your skin. UVA gives off the highest level of radiation, can pass through glass and does the most damage to your skin – aging, wrinkling and plays a part in non-melanoma cancer diagnosis. UVB radiation can cause sunburns, which isn’t good for your skin. The more sunburns you’ve had in your lifetime the more susceptible you are to getting skin cancer.

For those of us who are fairer skinned, please be aware of the dangers of overexposure to UV radiation as you are at a higher risk of sunburns and skin cancer. People who live in areas with bright sunlight all year round should also be careful and practice sun safety. Tanning beds may seem like a great idea because you’re getting a controlled amount of exposure, but in actuality tanning salons are probably the worst places to get radiation. The “controlled” exposure is actually over 5 times the amount emitted by the sun.

If you have a job that requires you to be outside, make sure you’re taking precautions during 12 p.m. – 4 p.m. when the sun is at its most bright. Studies have shown that skin cancer usually occurs in people over 50, however the 65 and older have seen an increase in cases. Those most in danger of skin cancer are older white men and younger women. It’s important to note that the cases in which younger women are diagnosed usually resulted in those who frequently hit the tanning beds or tanned outdoors.

Fun Fact: For those who give the argument that they are soaking up some much needed Vitamin D – being out in the sun for 15 minutes gives you your daily dose of Vitamin D. Anything over that actually has been proven to harm the body.

Be smart this summer season – stay in the shade and do your part to prevent skin cancer.