Cancer Over 65: Does Cancer Risk Increase With Age 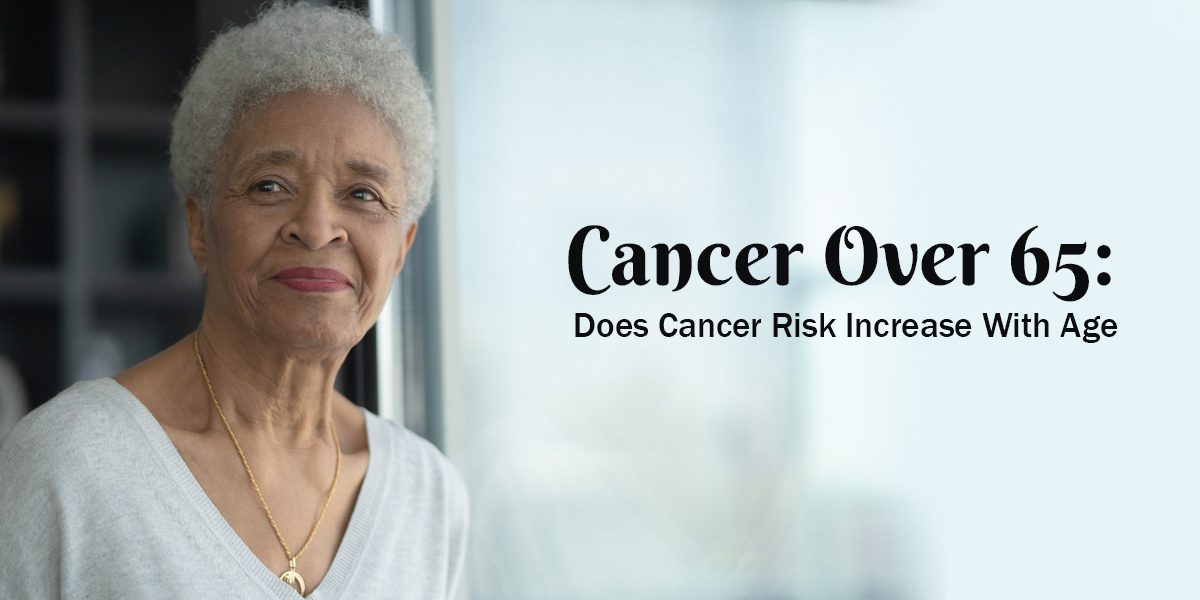 Cancer is a disease in which the body cells grow uncontrollably and spread to several parts of the body. It is pretty scary to know that age is one of the most significant risk factors for this malignancy. The risk of the disease increases considerably after the age of 50, while studies reveal that half of all cancers are at or after 65. The National Cancer Institute released a report and stated that one-fourth of the new cancer diagnoses are in people aged 65 to 74.

You must be having questions such as why does cancer risk increase with age? What are the chances of getting cancer at age 30? What is the average age of cancer death? But before that, let us find out the median age of diagnosis. Many women above 61 are diagnosed with breast cancer; 66 years is the median age for prostate cancer, 70 years for lung cancer, and 68 years for colorectal cancer. Age is just a number as the condition can occur at any age; for instance, the median age for bone cancer is less than 20, while kids are more likely to be diagnosed with neuroblastoma.

Mutation and other changes in the genome (the entire set of genetic instructions found in a cell) are regarded as the root cause of cells becoming cancerous. Mutations generally disrupt genes that control cell division and growth, which leads to an uncontrollable growth of cells. A flood of abnormal cells form tumors, and additional mutations disable tumor-suppressing proteins, which alleviate the tumor formation by modulation of cell growth. Many people generally don’t know that a series of mutations in genes occur over many years before the cells become out of control.

Many of you must have come across the question: does cancer grow slower in the elderly? Studies reveal that several types of cancer in the elderly are slow-growing and generally do not cause mortality. There is an increased chance of dying from some pre-existing condition than from screen-detected cancer.

Why Does Cancer Risk Increase With Age?

There is no conclusive explanation on why chances of getting cancer by age increase? Scientists continue to look through an array of theories, but many studies suggest that the cells in our body are damaged over a period of time. Furthermore, it is also said that malignancy develops in older people generally because of their exposure to radiation, sunlight, environmental chemicals, substances in our food, and several other carcinogens.

The story of how cancer and aging are linked has not been completed yet; studies and research are still going on. Everyone would hold back the hands of time, but it seems unreal. But according to scientists and doctors, managing chronic conditions and making changes in day-to-day life may reduce the risk of malignancy. Applying changes in your life may help reduce the odds of getting cancer by age.

How Can Cancer Treatment Differ When You Age?

Age should not be the deciding factor in treating the disease. However, making treatment plans for older people can be quite challenging and complicated. For instance, older people are likely to experience severe side effects from treatment.

Considering every factor in mind, doctors and family members make decisions about what treatment plan is best. This is generally referred to as ‘shared decision making.’ Cancer treatments that can affect older people are mentioned below.

Medications are generally given through the bloodstream, which reaches directly to the cancer cells. It is also known as systemic therapy. These treatments include hormonal therapy, chemotherapy, immunotherapy, and targeted therapy, which affect your whole body. Studies reveal that older and younger people have similar responses to these therapies, but the older a patient is, the more side effects there will be.

Surgeries and anesthesia (the medicine used to block pain during surgeries) generally possess risks for everyone. Doctors may perform extensive surgery if you are older. Also, you are more likely to experience severe complications after the surgery. The condition of your organs is also a deciding factor for whether or not surgery is a good option for you.

It is often regarded as a stem cell transplant and can effectively treat certain types of cancer that usually affect older people. Doctors have been performing bone marrow transplantation extensively for patients older than 60 years.

The therapy is generally performed to lower the risk of cancer or help treatments such as chemotherapy and surgery perform better. The side effects of radiation therapy depend on the treated body part. Doctors sometimes also recommend less intense treatment depending on the health condition.

The most significant thing is that we need to determine a perfect way to treat aging, which could also help us remain healthy. Changes are taking place in science and medicines, and medical organizations are coming with anti-aging therapies. But in general, these therapies can not be afforded by everyone. So what should we do now? There are multiple cancer-preventing tips available out there that make people even more confused. We have created a list of a few simple tips that can be applied to our lives to avoid the disease.

Avoiding or quitting tobacco is considered the most significant part of cancer prevention. Smoking causes multiple types of cancers such as throat, lung, mouth, bladder, pancreas, and many more. There are several stop-smoking products in the market one can use.

Maintaining a healthy diet not only helps you prevent cancer but also benefits you in many ways. You should always eat plenty of fruits, vegetables, whole grains, and beans. The International Agency for Research on Cancer released a report stating that processed meat increases the risk of certain types of cancer. Try to limit processed meat.

Studies reveal that maintaining a healthy weight reduces the chances of getting several types of cancer such as lung, colon, kidney, prostate, and many more. Try to increase your physical activities; a minimum of 150 minutes of moderate aerobic activity will help you control your weight.

Sun is regarded as the most responsible factor for skin cancer. It is always advised to avoid the sun when the rays are strongest. Try to be in shades when you are outside. Wear loose-fitting and tightly woven clothing that covers most of your skin. Using a sunscreen with an SPF of at least 30 would also help.

Seeking regular medical attention is one of the vital prevention tips. Regular check-ups and examinations help discover the condition at an early stage when treatments are more likely to be successful.

Several other preventive measures such as getting vaccinated, practicing safe sex, and many more can also help avoid cancer.

To study more about how cancer and age are linked to each other, visit the University Cancer Centers website.