Immunotherapy For Cancer: Benefits And More 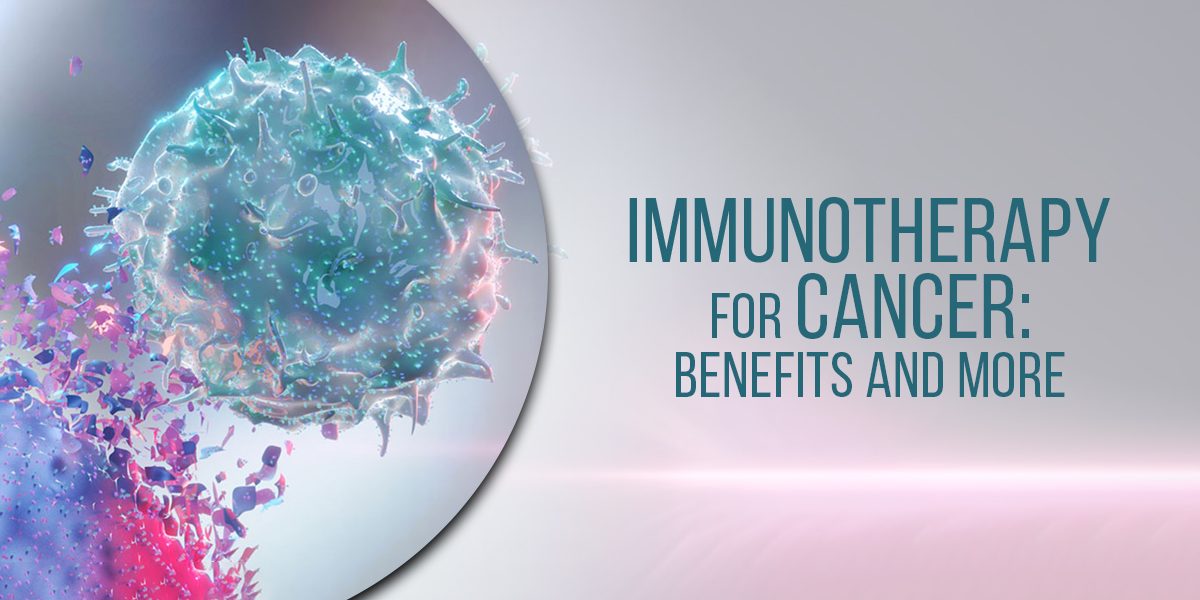 Furthermore, two immunologists, Tasuku Honjo and James P. Allison, were awarded the Nobel Prize to discover cancer therapy by inhibition of negative immune regulation. But what is immunotherapy for cancer? Let us find it in detail.

Immunotherapy is a cancer treatment that uses a person’s immune system to fight cancer. The therapy can boost or change how the immune system works so it can find and attack cancer cells. If your doctor has included immunotherapy in your treatment plan, it is quite significant how it works and what to expect from the therapy to make better decisions.

The therapy has become of great interest to clinicians, researchers, pharmaceutical companies, primarily those who treat several types of cancer in recent years. Moreover, the standard of cancer care is changing and gaining complexity for managing patient care. Studies reveal that immunotherapy works better for some kinds of cancer, while doctors suggest several other treatment options for different types of cancer.

Before discussing the several types of cancer immunotherapy and its benefits, we need to know the several functions of our immune system.

Role Of The Immune System

We all have studied that an immune system is a group of special cells, organs, and substances that help you protect from several diseases and infections in our junior classes. Immune cells generally travel throughout the body to protect it from germs that lead to infections. Studies also reveal that a strong immune system helps protect you from cancer in many ways.

In a nutshell, people with healthy immune systems develop cancer as there are numerous limits on their systems. Let us talk about these limits in detail.

To get rid of such problems, medical experts have found several ways to help the immune system find cancer cells and strengthen their response so that they can easily destroy them.

Like we read, cancer immunotherapy helps stimulate your body’s immune system to kill and target cancer. Immunotherapy is generally an umbrella term that describes several treatments. Some types improve the disease-fighting powers, while other types attack certain kinds of cells found in tumors.

Your immune system uses a system of brakes known as checkpoints when it finds invaders such as viruses and bacteria. These checkpoints generally stop invaders from attacking your healthy cells. Sometimes, cancer cells turn these checkpoints off so they can hide.

You can also say that checkpoint inhibitors are drugs that release the brakes on your immune system. Studies reveal that eight of these drugs are approved to treat cancer. They primarily block several types of proteins such as PD-1, PD-2, PD-L1, TF, and CTLA-4 on the surface of immune cells so that these cells go after the cancerous growth.

Adoptive cell therapies remove some of your immune cells and either increase their number or change them in a lab. These therapies can kill and find more cancer cells. Also, these are further divided into subtypes.

T-cells are generally robust white blood cells that fight infections. In this treatment, medical experts remove T-cells that attack your tumor. They grow a huge batch of these cells in a lab, primarily known as tumor-infiltrating lymphocytes. After which, they put these activated fighters back into your body.

Doctors remove T-cells from your body and reprogram them in a lab, making them quite powerful to fight the malignancy. These cells will look for tiny targets on the surface of your cells.

Medical experts generally add special receptors to the surface of your T-cells. This can lock onto and kill your exact type of cancer. The Food and Drug Administration or FDA has approved two CAR T-cell therapies.

Experts are looking at several new ways to use CAR T-cell therapies against cancer. One method is to take these cells from healthy donors and make effective treatments for cancer patients.

The key responsibility of these immune cells is to attack foreign invaders such as cancer in your body. Studies reveal that adding CARs to Natural killer cells helps to target the malignancy even better.

What are antibodies? The immune system’s proteins are known as antibodies that find and stick to other proteins called antigens on cancer cells. After which, they destroy the cancer of other parts of your immune system. It is quite surprising that antibodies can also be made in labs known as monoclonal antibodies. They work in different ways.

These are the most common types of antibodies used in cancer treatment. Since they remain unattached to anything, experts refer to them as naked. Furthermore, they improve your immune system’s response against malignancy and block antigens that help grow and spread the disease.

These antibodies generally attach to two proteins at once, while some attach to both an immune cell and cancer cell, which helps the immune system attack the malignancy. Blincyto or leukemia drug blinatumomab attaches to a protein on T cells and leukemia cells.

These antibodies generally have a radioactive particle or chemotherapy drug attached to them. At the same time, antibodies attach directly to malignant cells, which help reduce side effects and allow treatments such as radiation and chemotherapy to work better.

Several monoclonal antibodies have been approved to treat different types of cancer by the FDA. Also, research is still going on to see how immunotherapy for bladder cancer or any other type of cancer works.

Viruses such as flu infect healthy cells and make us sick, whereas oncolytic viruses are a special type that infects and destroys malignant cells without harming normal cells. One oncolytic virus, talimogene laherparepvec, has been approved by the Food And Drug Administration to treat metastatic melanoma, the most serious type of skin cancer.

Furthermore, the FDA has approved three vaccines to treat cancer. These are

Therefore, there is immunotherapy for prostate cancer, throat cancer, cervix cancer while researchers are studying several other cancer vaccines in clinical trials.

Other kinds of immunotherapy generally boost the immune system’s activity, and a more active immune system can fight the malignancy in a better way. These drugs generally fall into a few classes:

Interleukins, a type of cytokine, is a protein that some white blood cells produce to control your immune system’s response to cancer. Furthermore, IL-2, a man-made version of Interleukin, increases your body’s number of NK and T cells. IL-2 aldesleukin is approved immunotherapy for kidney cancer and skin cancer.

Immunotherapy has become a major way of treating cancer in the United States and several other nations worldwide. Oncologists are prescribing this therapy to their patients, and this would not have been possible without years of research and testing. These therapies are also available through clinical trials, which are controlled carefully, and monitored studies involving patient volunteers.

Experts haven’t mastered all the immune system’s cancer-fighting capabilities yet, but immunotherapy has been saving the lives of numerous cancer patients worldwide. Furthermore, the therapy has the potential to become more personalized, precise, and effective than other cancer treatments and has fewer side effects.

The benefits of cancer immunotherapy have been mentioned below:

Unlike other cancer treatments such as chemotherapy and radiation, immunotherapy generally works well with skin cancer. Furthermore, chemotherapy may work better if your doctor has also prescribed immunotherapy.

Has Fewer Side Effects

One of the major benefits of immunotherapy is that it causes fewer side effects than other treatments. The therapy targets your immune system and not other cells of your body.

When you have immunotherapy, the malignancy may be less likely to return. With this therapy, your immune system learns to attack cancer cells if they ever come back, known as immunological memory.

You can visit the University Cancer Centers website if you have any doubts, such as immunotherapy for breast cancer, liver cancer, or any other malignancy. We are known to provide the best personalized and individualized cancer treatments to every patient at minimum prices. You can also reach out to us if you have any cancer-related queries.